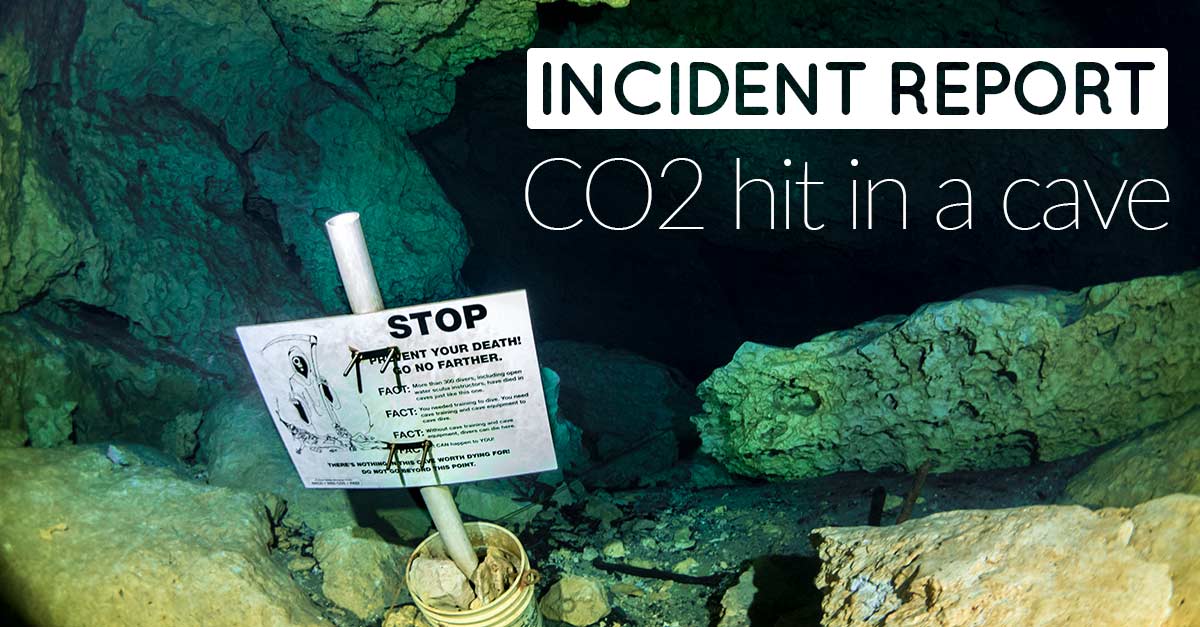 The more experience I get on rebreathers and, especially, diving rebreathers in caves, the more conservative I am with bailout calculations. Having been in more than a few sticky situations over the years, the one question that is almost always present is, Do I have enough gas to get me out of here?The answer is usually probably.

It was a guided dive

A few weeks ago I had the pleasure of guiding a great diver from outside the USA. We’ll call him Lucas. Lucas is a very experienced technical and CCR diver, but fairly new to cave diving. He has around 75 cave and mine dives in total.

Over the first few days, we took it slow, gradually progressing to more complex and challenging dives. On the day of the incident we planned to make a deeper dive, but the plan was pretty straightforward. We would dive Peacock III and make our way back to Hendley’s Castle. After reaching a maximum depth of about 56 m/185 ft, we would poke around for a while before heading out.

Our total dive time was planned for around 90 minutes as we were planning on doing a second dive this afternoon. Our bailout gas consisted of one 11-liter AL80 deep stage per diver, carrying a mix of 18/45. Lucas was also carrying two 11-liter AL 80s with EAN32. I also had two 13-liter LP85s, filled with 30/30 filled to 262 bars/3800 psi. We each staged an O2 bottle in the cavern. All totaled, we had approximately 15,000 liters/550 cubic feet of bailout of gas in all for the team.

All went well until we were roughly 180 m/600 ft from the exit, at a depth of about 17m/55 ft. Lucas was leading out. Suddenly, he bailed out to off-board, making contact with the line and the wall next to him. I approached and made contact with him when he signaled hypercapnic.

I could see his breathing rate was extremely high. Gas flowed from his second stage almost as if it were free-flowing. He had bailed out to his deep stage so, after we had him calmed down a bit and stabilized, we got him on his EAN32 cylinder and began our exit.

It took roughly five minutes to stabilize before we began exiting. In that five minutes, Lucas consumed roughly 28 bars/400 psi out of AL80. We proceeded out at a comfortable pace. I was in physical contact with him throughout the exit. I also helped “push” a bit to keep his momentum moving forward without making him work at it much.

It took roughly 20 minutes to reach the exit from the point of bailout. In that 20 minutes, Lucas had blown through three-fourths of his EAN32 bottle. At the entrance, we got him switched on to O2. Lucas completed the remaining ten minutes of decompression at 6 m/20 ft. During deco, Lucas consumed nearly 55 bars/800 psi of his 5.5 liter AL40.

Once we reached the surface we rested for ten minutes before exiting the water. After exiting, it took another 45 minutes for Lucas to feel like he was back to normal again and had regained a normal breathing pattern stabilized.

Lucas said that, throughout the dive, something just felt “off.” Every task just seemed a little more difficult. It was as though it had been a couple of months since he had last been in the water. But Lucas didn’t feel “bad” until the moment he bailed out. This is when he suddenly felt that he could not catch a breath.

Disassembly and inspection of his rebreather found no evidence of failure or improper assembly. He had been diving a freshly packed scrubber (I had watched him pack it that morning). Lucas had been meticulous in his dive preparations all week.

The reason for the CO2 hit is unknown

My takeaway? Always plan for the worst. Including decompression, Lucas consumed over 2,800 liters/100 cubic feet of gas in just 180 m/600 ft, at an average depth of about 12 m/40 ft. His average consumption rate for the exit was roughly 51 liters/1.8 cubic feet per minute.

While a scary situation, everyone made it home okay. We can all learn a great deal from the incident. Extra conservative gas planning is paramount when entering a cave on a rebreather.